In Footprint Travel Photography, I touch briefly on how digital imaging allows you to rescue pictures that you would probably not have photographed in the days before digital post processing. When I started out shooting film, digital post processing was in it’s infancy. I can remember experimenting with a program called Digital Darkroom, and then moved on to early versions of Adobe Photoshop.

In these days though, unless you paid top dollar for a drum scanner, you couldn’t get professional quality results. Desk scanners weren't really up to the job. Even if you did have a top quality scan, then most desktop computers weren’t powerful enough to handle it - Apple Macs even had an cursor icon which was a steaming coffee cup, which showed when the machine was processing. A lot of time was spent waiting around for things to happen. As a professional, there was little point in even trying to digitally retouch images.

When a book or magazine used an image they wanted an original transparency. This was scanned at a repro-house and the resultant image used. There was little or no opportunity for retouching an image. So when you were out taking pictures there were so many times when you just didn't shoot.

For instance, a bit of graffiti on a building might ruin a shot. If there were stray wires in a picture, or a vehicle in a landscape it might not be worth shooting it in the first place. Similarly the light coming from an angle when your shadow would get in the picture, or if you had to mask out the sun with your hand in the frame, then you just wouldn't shoot. There was still the possibility that you could scan and retouch a digital version of the picture, but virtually all publications wanted to have original film submitted and they generally wouldn't go to the trouble of retouching an image them selves. They would just use an alternative image, that didn't have any of these flaws.

Now, the position is completely different. A combination of digital capture, quality desktop scanners for film, lightning fast computers and improvements in software means that image correction is now not a last resort, but an integral part of the digital process.

Pictures that previously would have been worthless are now able to be taken, corrected and drastically improved. Is it cheating? Well that is really up to you. I tend to think that often corrections serve to make pictures more real. For instance, taking things out of the frame that don't belong there such as vehicles or people, or even your shadow of the means that the people looking at your pictures get a more accurate representation of your subject.

There are a few pointers though: it is better to anticipate any corrections that you might have to make, and allow for them when you take the pictures. It will make the digital correction process much easier and quicker.

It is all but impossible when photographing multiple moving subjects such as these flamingos in flight near the Magkadigkadi Pan in Botswana to control the composition. I was able to make sure that the leading 'v' of birds was in pretty much the right place, but cropped on birds at the top, bottom and left of the frame. This looks quite ugly, and I believe detracts from the picture.

Luckily. this image is easy to correct, as the birds are against a plain background. Firstly, I used the Clone Tool in Photoshop to retouch out the flamingos that are cut by the edge of the frame. Next I moved all of the remain flamingos back slightly so that compositionally there was more space in front for the birds to move in to. Finally I cropped the image to remove a lot of the dead space. 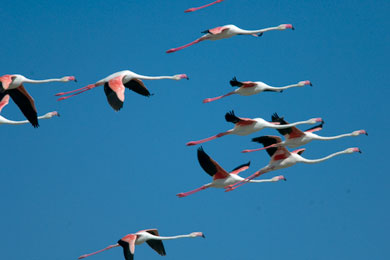 Sometimes the sun will be coming from the wrong place, and there will be no way of keeping your shadow out of the picture. There are certain ways around this. Try to stand behind something, so it is that shadow, not yours that is in the picture. If there are a few people around, then keep your elbows in so you don't look like a photographer. If you have to have your shadow in the picture, then think about where you are going to let it fall, so that it is easier to take out again!

Because I made sure that my shadow was in an area of dry grass, it was relatively easy for me to retouch it out. Always avoid letting you shadow fall on areas that will be difficult to retouch such as for instance over the branches of the tree. Areas like painted walls are also really easy to retouch out.

When retouching try to avoid inadvertantly duplicating details and potentially ending up with a line of identical rocks or bushes! This sort of thing will stand out drastically.

Having something like a camper van in a landscape can completely dominate the picture, even when it is way off in the distance and barely distinguishable. In this shot the eye is instantly drawn to the vehicle, which rather ruins the whole shot.

Before the days of digital retouching I would either have sat and waited for the vehicle to move away, or probably just not taken the picture.

You can usually avoid flare on your pictures by using a lens hood but there are times when a lightshource such as the sun is so close to the edge of the frame (sometimes even insode the frame) that it will still cause flare. Sometimes you can just shield it using your hand, but you might find that the only way to completely avoid it is to actually have you hand in the picture.

The good thing about this is that your hand will generally fall on a a clear area, such as the sky. As long as you are careful not to break the line of any detail such as a tree or even the horizon, then you can take your hand out in a few seconds: much easier than trying to retouch out flare!

Photographing a monk walking down a steep slope towards the village of Korzok, I noticed a couple of tourists in the way. In the days before digital post-production, I would not have taken the shot.

This image is relatively easy to reouch, although the tourist on the left is over an area of significant detail on the steps. This makes everything a little more tricky. Their top half was easy to remove, but the bottom half needed to be carefully sorted at 100%, This sort of retouching can only be done manually, using the clone tool, and not using the automatic retouching tools in Adobe Photoshop, such as the Healing Tool Brush.